Are House Prices on Their Way Down ?

You are here: Home / Lite Blog / Are House Prices on Their Way Down ?
Categories: Latest
Tags: CEBR, England, UK 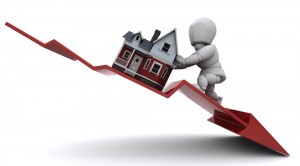 The market has been looking better for buyers for a while, thanks to the increasing number of properties for sale and the smaller numbers of people looking for a new home. However, what homeowners, including recent buyers, want to know, is what will happen in the longer term. A new report from the Centre for Economics and Business Research has predicted that next year could be a significant turning point for the property market in the UK.

Prices have tended to rise during 2014, and this is a trend that is set to continue throughout the rest of the year, according to the CEBR. The end result is likely to be an overall increase of about 7.8%. However, the trend is expected to reverse in 2015, when property values may start to decline. The predicted fall is not likely to be as large as the rise that we have seen this year, so that gains in value that have accumulated over 2014 will not be wiped out completely. The CEBR predicts that the dip in prices in 2015 could be just 0.8%.

Although this amount seems small, the turn from steady increase to small decline could be significant for anyone who is hoping to move into their own home for the first time. While existing homeowners who are expecting to move may find the reduction in prices offset by the decrease in their current home’s value, first time buyers could benefit from prices that could drop by an average of just over £2000, as well as the chance to get onto the property ladder without having to catch up to prices that keep climbing just out of reach.

If the CEBR’s predictions do come true next year, then 2015 will be the first year that property prices have declined since 2011. Several factors make such a decline likely, and their effects are already beginning to be seen on the market. The Mortgage Market Review began to slow down mortgage approvals in April, demand from buyers has declined particularly in the least affordable areas, and expectations that the Bank of England will raise interest rates have made many more cautious about the housing market.