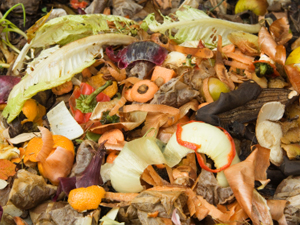 Recycling has become common across the UK, but there is one potentially recyclable type of waste that is usually still thrown out with the rest of the rubbish. Food waste is one of the biggest components of our household rubbish, and while some of us do compost vegetable peelings or feed used tealeaves to our garden roses, a lot of it ends up in landfill.

Efforts to increase recycling seldom focus on this problem. For example, a new £5 million fund has been made available for initiatives to encourage people to recycle more, but rather than focusing on food waste, it has been linked to regular collections of non-recycled waste. The funding will only be made available to areas that commit to weekly bin collections, despite the fact that reducing the frequency of rubbish removals can actually increase the amount that people recycle. A less regular collection makes people more likely to separate their waste into the different boxes or bins provided in order to avoid ending up with an overflowing bin. Some areas have switched to fortnightly, or even three-weekly, collections, and the Chartered Institution of Waste Management suggests that monthly collections might become a possibility if we start separating out food waste.

Taking food waste out of our bins would have an even greater impact than removing any other type of recyclable waste from the general rubbish. Not only is food one of the largest components of our waste, but it is also the one that attracts pests and decomposes most easily. If we were no longer throwing out food waste in our main bins, we probably wouldn’t need them to be emptied every week.

A monthly collection of non-recyclable waste might work well if it is only picking up small amounts of waste that will not rot while waiting to be collected. It is food waste that we need to be collected on a weekly basis, so if we can convince people to keep it separate, we might be able to come up with a system that keeps everyone happy. We would be able to recycle more rather than sending food waste to landfill, without any of the problems usually associated with less frequent rubbish removals. We could even start creating more power plants to use the collected food waste to produce renewable energy.