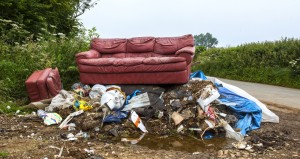 In mid February the Welsh Assembly members approved new rules which make it more straightforward for councils to tackle householders who pass their unwanted waste onto unauthorised people. The new rules mean that householders could face a £300 fixed penalty notice if they do not get their waste removed in a responsible manner.

Current legislation means that householders can only be issued with a fixed penalty notice if they fly tip themselves. Whilst they can be prosecuted this can be costly to councils and leaves the householder with a criminal record when they could easily have handed over their waste in good faith. The new rules go that one step further and many see the move as essential in getting people to take complete ownership of their waste even after it has left their property.

In just one year Welsh councils saw in excess of 35,000 fly-tipping incidents with clean up costs of around £2m for taxpayers in 2017/18. Regardless of who removes rubbish from a property the householder should take their duty of care seriously and ensure they hire an authorised person or firm. These measures are intended to reinforce this duty of care requirement and deter unauthorised waste firms which blight this issue.

Whilst the rules may only come into force in Wales for the short term it sends a message to councils and Government about this growing problem in the rest of the UK. The fixed penalty of £300 may be reduced to £150 if paid early and it is reported that councils will be able to keep the money raised from fixed penalty notices to use towards enforcement and clean up.

Things householders can do to avoid prosecution

There are measures that any UK householder can take to protect themselves and demonstrate their duty of care has been executed. These include: using only an authorised waste removal firm like TH Removals – any such firm should be able to provide you a copy of their carriers license; asking for a written receipt for the waste that is being removed including detailed description and in addition a written declaration of where the waste will be taken to for disposal.