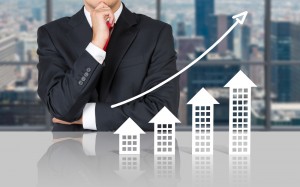 Property prices increased by just 0.1% over the course of the last month, indicating that the property market as a whole may be stabilising. The average price of a property in the UK now stands at just under £189,000. Although it was the fifteenth successive month in which property prices were growing, this small increase in July marked the lowest rise in the market since April 2013.

According to the Nationwide Building Society, this slowdown in the rate of increase was not unexpected. Analysts have seen many signs over the last few months that the property market has been beginning to slow its pace of growth. The July rates fit into a larger pattern, with the slower rate of growth helping to bring down the annual rise in property prices for this year. In June, it was calculated at 11.8%, but given July’s slower rate of increase, the annual rate has declined to 10.6%.

The slowdown comes after the number of people being approved for new mortgages dropped dramatically during the first half of the year, thanks to the tougher criteria imposed on borrowers during April by the Mortgage Market Review. The number of people who were approved dropped by almost 20% between the months of January and May, and fewer people were contacting estate agents or considering removals.

The market now appears to be recovering from this change in lending practises, and as the rise in property prices slows, there may be more interest in buying and removals. The number of mortgages approved in June rebounded from the lower levels during May, and lenders are expecting the property market to do well in the coming months. They expect mortgage rates to remain low, while the labour market continues to strengthen, creating more confidence among potential buyers. However, there may be problems for those planning purchases and removals in the longer term if the supply of new housing does not manage to keep up with this increasing demand. New properties are being built, but the rate may not be fast enough to fulfil the need for more housing.