Are Homebuyers Taking On More Than They Can Afford ? 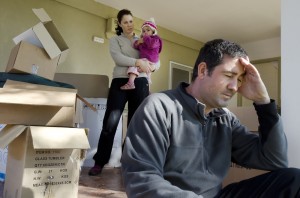 Everyone knows that buying and moving into a new home can be an expensive business, with costs ranging from removals to redecorating, but it seems that some homeowners are still unprepared for exactly how much it will cost. The higher costs created by rising house prices are part of the problem, but difficulties are also created when interest rates on variable or tracker mortgages change.

An increase in the number of complaints made about interest-only mortgages has raised particular concerns. Complaints have risen by 6% during the last year, according to the Financial Ombudsman Service, and the Council of Mortgage Lenders is now calling for borrowers to discuss any problems with their lenders as soon as possible. Some homeowners are leaving it far too late before asking for help, but a solution can often be found much more easily when discussions start early.

However, problems are not just being caused by mortgage repayments. Some homebuyers are also struggling to budget for all of their removals and living expenses, according to the Money Advice Service. Borrowers can often get so caught up in the excitement of applying for a mortgage and choosing a property that they forget to account for all of their other expenditures when working out how much they can afford to spend on their mortgage repayments.

It is all too easy to overlook some of the smaller one-off costs associated with moving, such as hiring a removals van, because you are too focused on larger ones like the deposit, but it is essential to sit down and work out a complete budget before you make your move. Your budget should also include all of the regular costs that you will need to pay alongside your monthly mortgage repayments. The Money Advice Service suggests that most homeowners will need at least £1200 a month to cover bills and repayments. Lenders are also beginning to show concern about budgets beyond mortgage repayments in order to ensure borrowers can cover their living expenses. This could lead to more questions begin asked of applicants, but for those homeowners, particularly first time buyers, who have struggled to balance their budgets, taking more time to think about all their finances, not just their mortgages, could be very helpful.