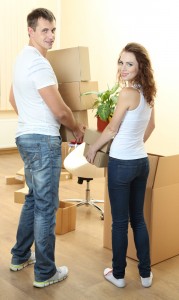 The rise in people planning their first property purchases and removals is thought to be due to the lower deposits now being accepted by many mortgage lenders. Raising a deposit can be one of the main barriers to making it onto the property ladder, so lowering this barrier can have a significant effect on first time buyers. The average deposit made by a first time buyer in June had dropped 18% compared to the same month last year, reaching £24,530. The average deposit has been below £25,000 for the last five months.

The Help to Buy scheme has played a part in enabling these first time buyers to access lending without needing to save up large deposits, but lenders have also been more willing to consider lending at higher loan to value ratios outside of the scheme.

However, the Money Advice Service recommends that first time buyers still need to think carefully about whether they can afford to buy a home. Careful budgeting is the key to making the switch from tenant to homeowner, so potential first time buyers need to ensure that they will be able to cover their monthly repayments and afford the additional costs associated with moving, including mortgage and solicitor’s fees, stamp duty, removals, furnishing and decorating costs, and home insurance. Buyers will also need to save up a deposit of at least 5% of the property price, and go through the mortgage application process, providing details about their income, debts and living expenses. Gathering all of this information on income and outgoings together to work out whether homeownership is affordable is still the first step to getting a mortgage and moving in to your own home.