Recycling Plastic to Save Sea Life 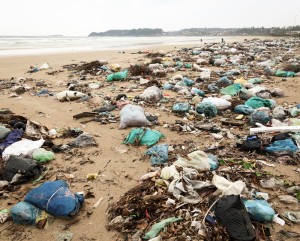 It is natural to feel a little curious about what happens to all of our waste after it has been collected from the kerb or we have sent a load of unwanted items away with the rubbish removals team. Sometimes, the end of the story is positive. People are recycling more, and many rubbish removals companies take a responsible approach to disposing of waste safely and protecting the environment. However, there are still too many examples of poorly handled disposals and environmental damage caused by rubbish.

One of the most shocking of these is the impact that plastic waste is having in the ocean. Plastic is a very durable material, which makes it very useful, but also very slow to break down when it is no longer needed. It floats and swirls around in the sea, gradually accumulating in five vast masses of drifting plastic spread out around the world.

A new survey of one of these areas, the Great Pacific Garbage Patch, has revealed that the problem has gotten much worse over the last five years. All kinds of plastics, from the small beads that are used by manufacturers to remnants of everyday household items like food packaging and toothbrushes are found in the garbage patch, which is now hundreds of miles long. The plastic that gathers here does not float around harmlessly. It can kill sea life, either by entangling them or by being mistaken for food and swallowed. Animals that try to feed on the plastic can choke or be killed by the toxic chemicals it contains.

The vast amount of plastic in the ocean and the terrible harm that it is doing to wildlife emphasizes how important it is to reduce the amount of plastic that we use and to make sure that we are recycling as much as possible of the plastic that we do have to throw away. We all need to make sure that we are all doing our bit to dispose of our plastic responsibly, and to ensure that rubbish removals companies, manufacturers and governments are all making their own efforts to reduce waste and recycle plastics too.